Is Bitcoin A New Type Of Property? 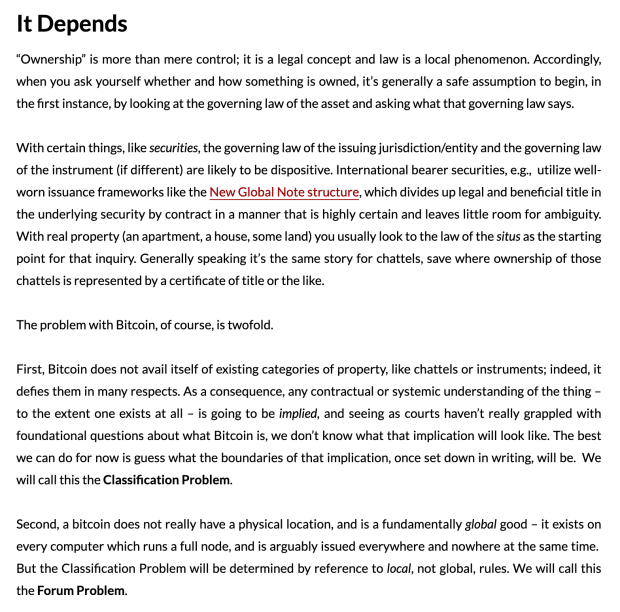 Bitcoin may eventually be labeled as a brand new type of property in the U.S. and U.K. because it doesn’t physically exist in any one specific location.

The below is a direct excerpt of Marty’s Bent Issue #1243: “Is bitcoin the emergence of a new type of property in the eyes of the law?” Sign up for the newsletter here.

Preston Byrne puts forward a solid argument that bitcoin will eventually be labeled as a new type of property and its understanding could be different in the U.S. and England.

This is a very interesting blog post in which Preston Byrne expands on an idea he’s published since 2018: Bitcoin represents a new type of property and this will eventually be recognized by a court of law at some point in the future. If you’re looking for something to noodle over during this bear market, your Uncle Marty thinks this is a very stimulating exercise in attempting to understand how bitcoin is and probably should be viewed in the eyes of the courts.

As you can see above, bitcoin is truly unique as a type of property due to the fact that it doesn’t actually physically exist in any one place because of the fact that the ledger is maintained in an extremely distributed fashion and it does not fit neatly into any definition of property that has been established to date. On top of this, the nature of control over a UTXO is determined by a private key, which can be signed by the individual who created it, someone who gained access to it via nefarious means or someone who used a very powerful computer to guess it. When combined, these factors make it pretty clear — as Preston points out — that we are dealing with a peculiar beast.

I’m not really sure how things like taxes will change if and when a court in the U.S. or England sets a precedent that designates bitcoin as a new type of property, but I am inclined to agree that it makes sense for bitcoin to set a new precedent. Never before has humanity interacted with an asset of this type. Treating it the same as real estate, a precious metal or other types of physical property has never made sense to me, intuitively. To be clear, I think this is a positive thing for bitcoin. The fact that UTXOs truly don’t exist in one location but in a globally distributed ledger, and that you can store private keys in your head has always led me to believe that bitcoin is simply information — speech, in particular.

If bitcoin gets designated as speech that is exercised in no specific location but everywhere at once, I imagine it could decrease the ease with which any individual court within a relatively honest legal system in any particular jurisdiction could try to claim bitcoin as taxable within their borders. By defining this new type of property as something that someone has ownership over but not in a specific location, plausible deniability increases significantly, which makes it much harder to enforce local laws on bitcoin owners.