As Bitcoin Price Falls, Is Now The Time To Buy Mining Rigs? 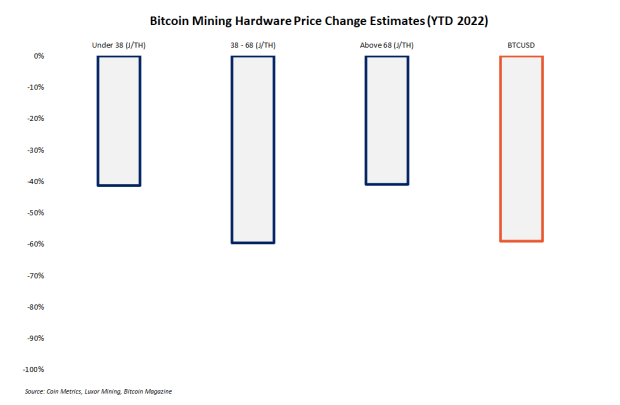 The drop in bitcoin price means mining rigs are on sale and prospective buyers may see big discounts before the summer ends.

One reason why miners often pay close attention to bitcoin’s price is because mining machines have a strong positive correlation to its fluctuations. And as bitcoin’s dollar-denominated value has dropped precipitously this month, mining hardware prices followed.

At its recent lows, bitcoin was trading near $17,000, a drop of over 60% year to date. Over the same period, prices for the most efficient mining machines fell by 41%, as detailed below.

Observing the relationship between prices for bitcoin and bitcoin mining machines offers useful insight into the mining sector’s reaction to bitcoin price volatility and timing for accumulating discounted hardware.

This article overviews current market pricing data for bitcoin mining machines, its correlative relationship to bitcoin itself, and discusses how and when miners might consider engaging with the summer hardware selloff as buyers.

The most- and least-efficient tranches of mining hardware have seen the smallest year-to-date price declines, according to market data curated by Luxor Mining. Machines with efficiencies above 38 joules per terahash (J/TH) and below 68 J/TH have seen roughly 40% declines since January. Over the same period, bitcoin has dropped roughly 60%.

Even though recent price declines for bitcoin and some mining machines have been similar on a percentage basis, the downward trends did not start or progress fully in sync with each other. The line chart below shows two peaks in bitcoin’s price during April 2021 and November 2021. Readers will notice that prices for the mining machines (data shown for the top-two efficiency tiers) didn’t peak until roughly a month later in both cases.

For one thing, since hash rate generally follows or lags behind bitcoin’s price movements, the prices of bitcoin mining hardware — the source of hash rate — also lagging behind should be expected. The reason for this is easily explained: For example, when bitcoin is in a sustained downward price trend, some miners that are facing dwindling profits choose to unplug and even liquidate their hardware, which introduces more sell pressure on the mining hardware market.

This same scenario reverses during bullish periods when miners – incentivized by climbing mining revenue – accumulate and deploy new machines. Of course, market movements in every trend (up or down) never happen this cleanly, but in general, this analysis explains the incentives that cause machine prices to follow bitcoin’s price.

Mining hardware prices also tend to lag bitcoin because of their basic function as “money printers,” which makes their owners, who are inherently long-term bullish, reluctant to hastily sell them. Between the operating costs, capital expenditures and overall bullish ideology required to even start mining, this sector of the Bitcoin economy is always the most heavily-leveraged long, by a significant margin. When the price goes up, miners are eager to buy more hash rate. But when the bitcoin price starts to dip, miners with thin profit margins and poorly-planned operations — despite their bullish philosophies – are forced to stop hashing and often to liquidate their hardware. In short, the internet money printers are valuable, and nobody is eager to sell theirs.

It’s worth noting that slight dips in bitcoin’s price are usually insufficient pressure to part a miner from their machines. But sustained downward price action like miners have seen for the past several weeks can eventually force less-profitable miners to raise cash by selling hardware.

Where To Buy Bitcoin Mining Hardware

The market for mining hardware is now larger and more sophisticated than at any other time in Bitcoin’s history thanks in large part to many companies that have built hardware marketplaces to service retail miners. Many of these resale markets, however, are also often used by large institutional buyers that aren’t working directly with manufacturers, like Bitmain or MicroBT.

Some of the leading mining hardware markets are run by Kaboomracks, MiningStore, Upstream Data and Compass Mining. Other marketplaces exist, but the hardware market is rife with scams. The effects of bitcoin price drops are already seen in the machine marketplace, with massive lots of lower efficiency hardware being listed by miners through Kaboomracks, for example. The company even published a notice that its availability for accepting older machines like Antminer S9s is limited, presumably to ward off a potential deluge of miners looking to liquidate.

Mining pools like Foundry and Luxor also offer hardware brokerage services for serious miners. But beyond the company names listed in this article, every prospective buyer should be abundantly cautious before sending any funds to anyone posing as a seller of hardware.

Retail miners (aka., the plebs) can buy directly from manufacturers, too. Sometimes website buys are restricted or unavailable for small quantities (usually during times of red-hot buyer demand in a bull market), which leaves only institutional buyers who have direct access to the manufacturer’s team able to place orders. But in the current market, manufacturers have steeply discounted dollar-denominated machine prices, and their website listings are abundant.

How Will Bitcoin Mining Machine Prices Change From Here?

More downward price movements from bitcoin, however, are sure to also trigger more machine supply on the resale market as less-efficient mining operations will be forced to liquidate some assets. In either case, bitcoin’s price will often act as an indicator for mining hardware prices, and in general, miners can plan their machine purchases accordingly.