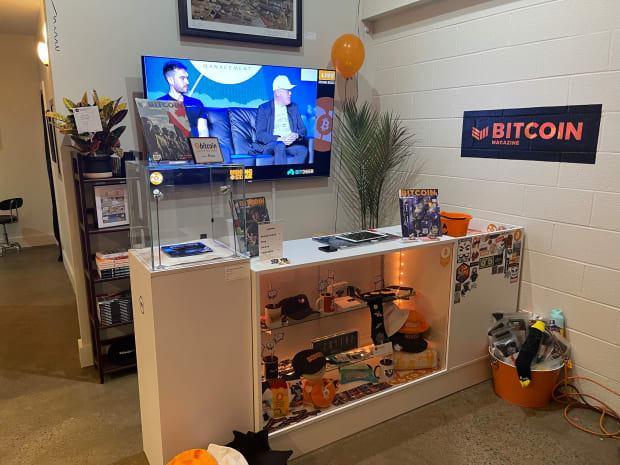 The Bitcoin Magazine Art Gallery will serve as the Bitcoin world’s preeminent exhibition space for established and emerging artists.

Nashville, TN. — Bitcoin Magazine has unveiled the Bitcoin Magazine Art Gallery (BMAG), a display space and storefront featuring a jail cell exhibit dedicated to Bitcoin pioneer Ross Ulbricht, who faces a double life sentence plus 40 years for his role in founding the darknet marketplace Silk Road. The location will serve as an outlet for Bitcoin-related clothing, hardware and the print edition of Bitcoin Magazine, while the art gallery will feature exclusive visuals from the leading creatives in the Bitcoin space as well as new artists to showcase their work.

The exhibit dedicated to Ulbricht is a recreation of his prison cell at Tucson State Penitentiary. The 10-foot-by-6-foot space, which is the exact same size as the room shared by Ulbricht and another prisoner, features iron bars and a sink and toilet combination found within American prisons. The exhibit displays writings and paintings from Ulbricht, as well as scannable information sets about Ulbricht’s story, sentencing and the ongoing mission to secure his freedom. A mounted television displays a video animation of drawings done by Ulbricht in prison.

“I and Ross’s family are so grateful to BTC Inc. for steadfastly supporting Ross throughout the years and not letting him be forgotten as we work toward his freedom,” said Lyn Ulbricht, Ross’ mother. “This installation, which provides a facsimile of Ross’s cage and displays his amazing work, is a powerful reminder that this exceptional man and pioneer is condemned to die by incarceration unless something changes.”

Prints of the artwork created by Ulbricht will be available for purchase, and all proceeds will be donated to FreeRoss.org. In addition, an original painting done by Bitcoin Magazine’s artist in residence, Tommy Marcheschi, will be offered to anyone willing to make a donation to the Ulbricht Freedom Trust of 183 million sats, the sats equivalent of the dollar amount that Ulbricht was ordered to pay by the courts.

“We seek to creatively stimulate donations and raise awareness for the effort to free Ross Ulbricht and give him the rest of his life back,” explained Marcheschi. “As long as he sits in the custody of the State, none of us ‘Bitcoiners’ are truly free.”

With Ulbricht entering his 10th year in prison, the exhibit hopes to bring attention to an issue that Bitcoin Magazine has sought to highlight in the past, including hosting Ulbricht’s writing and featuring an audio message recorded by Ulbricht in prison at its Bitcoin 2021 conference.

In addition to the Ulbricht exhibit, some examples of the exceptional artwork that will be on display include works like Brekkie von Bitcoin’s carved calacatta marble sculpture “AWAKENING,” and Trevor Jones’ oil and microcrystalline wax piece on a copy of the Financial Times entitled, “The Architect (Satoshi Nakamoto).”

Dennis Koch, Bitcoin Magazine’s art gallery coordinator, described why this space is important, saying, “Meetup locations like Bitcoin Park in Nashville or Bitcoin Commons in Austin affirm that there’s no replacement for spending time with Bitcoiners in real life. The same goes for the new Bitcoin Magazine Art Gallery. We want to build a tactical meetup and exhibition space for artists. Nashville has a tangible bitcoin vibe, and BMAG is going to be a big part of this expanding scene.” Describing the link between art and bitcoin, Koch explained, “Selling artwork for sats is an artist's way of mining. Artists know proof-of-work and energy transmutation has always been a part of the alchemical process of painting.“