The World Is In Disarray, But The Worst May Be Over 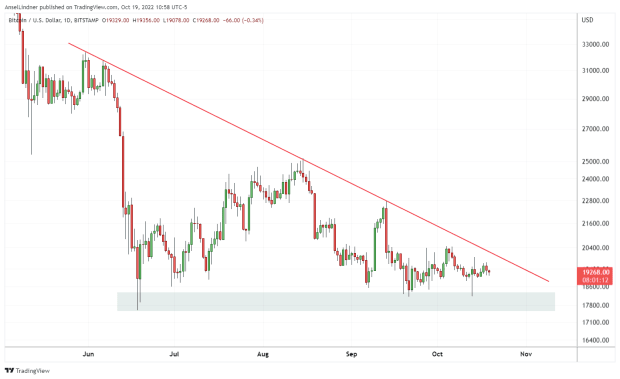 Don’t be fooled by the news, the bitcoin price and stock market is stabilizing and natural gas stores are more than full. We may be past the worst days.

“Fed Watch” is a macro podcast, true to bitcoin’s rebel nature. In each episode, we question mainstream and Bitcoin narratives by examining current events in macro from across the globe, with an emphasis on central banks and currencies.

In this episode, CK and I cover a large chunk of the ongoing macro news. First, we update the situation in the U.K. gilt market. Then swing over to China to cover developments from the 20th Party Congress, the real estate market and the general investment climate. Lastly, we discuss the European energy crisis and current storage situation.

Each week, CK and I lead off with a few charts including bitcoin and other currencies to center our macro conversation from that perspective.

In the week of October 17, 2022, the bitcoin chart was showing continuing strong support in the range of $17,500-$18,500 despite all the geopolitical and global economic stresses happening. The stability of bitcoin relative to most other assets must be getting noticed by people managing large capital pools in the world.

CK and I also spoke briefly about the U.S. stock market and its similarly stable performance. If you were only to listen and read the mainstream financial press and never look at the charts, you might be fooled into thinking stocks were much lower, or at least falling on a daily basis. However, as it stands now, the S&P 500 is above the June low.

Below is my dueling dollar indices chart, showing the DXY which is heavily weighted toward the euro and yen, and the broad trade-weighted dollar index that includes many more currencies depending on their share of trade with the United States. Importantly, this includes the Chinese yuan and Mexican peso.

As you can see, the trade-weighted dollar performed better during the initial COVID-19 crash, but has lagged the euro-heavy DXY. What this means is dollar strength has become more broad-based in the last couple of weeks.

The last currency chart we analyze is the Japanese yen, which is crashing versus the dollar, reaching 150 yen to the dollar. In the broadcast, I mention that this is an example of the dollar’s current effects throughout East Asian currencies.

Admittedly, CK and I have not watched the crisis in the U.K. as closely as other things, so we take an opportunity to recap the timeline of what’s gone on there so far.

The Bank of England (BoE) announced intervention on September 28, after the long-term gilt market sold off from roughly 2% yields to 4.5% yields in a matter of weeks. On earlier shows, I mentioned the importance of the end of the Q3 for financial stress, which is well known, but for some reason the BoE decided to begin quantitative tightening (QT) one week prior to the end of the quarter.

On October 3, the BoE adjusted their intervention size up to £10 billion per day, and an end date for the program of October 14. Most economic commentators did not think it would be possible to end it so quickly and in such a telegraphed manner. They were proven wrong, as the “no quantitative easing” program ended on the projected date. The latest is that the BoE will resume their QT attempts on November 1.

We also spoke about the interesting coincidence of the emergency swap lines between the Federal Reserve and the Swiss National Bank (SNB) that took place during the peak of the BoE’s troubles. I speculated that this swap line could have served as an obscured bailout of these troubled financial institutions in London, routed through the SNB.

The crisis seems to be under control for the moment, but the damage may have been done. In these financial crisis episodes, confidence is broken and despite the acute panic being over, the market is shifted to a more fragile state of mind going forward. This can lead to the crisis popping back up after a few months.

I did not pull any quotes for the show from Xi Jinping’s two-hour opening speech. I provided a link to the full transcript and I encourage people to read it for themselves. It is eye-opening to see the rhetoric, the devotion to Marxist-Leninist communism and the hubris of authoritarian central planners.

What I did cover directly in the episode was a blog post by BlackRock and a tweet thread by Michael Pettis, confirming some of my views on the state of China today and their path in the near term.

BlackRock’s words are important as they represent what large capital pools think about China. From their post, we learn that Chinese export volumes are likely to be down 6% this year and next, although in nominal dollar terms they will be up 3%. The authors also note the horrific demographic situation in China and say it precludes the needed domestic growth to counteract the effect of shrinking exports. In a country with massive debt and demographic issues, this is not a recipe for economic growth.

“Recession is looming now for the U.S., U.K. and Europe. But this time, China won’t be coming to its own, or anyone else’s, rescue.”

Michael Pettis, Senior Fellow at the Carnegie Endowment and professor of finance at Peking University’s Guanghua School of Management, seems to agree with the direction of the Chinese economy in the medium term. His tweet thread exposes the no-win situation faced by the Ministry of Finance in China.

The Ministry of Finance said that state-backed entities are strictly prohibited from purchasing land by raising debt. Pettis agrees with this prohibition, because “local governments [reversing] the decline in land-sale revenues by setting up SPVs to buy land from themselves [as] a way for them to borrow money and pretend the proceeds were actually land-sale revenues.”

Pettis, however, emphasizes the same no-win scenario facing the Ministry of Finance that the BlackRock comments did. Namely, that Beijing has no room to stimulate. They are cracking down, but not offering any help.

“The MoF stopped them from faking revenues without addressing the reasons they had to do so.”

“Beijing must know how difficult the circumstances are that local governments face, and yet isn't doing much to help. I think we are probably seeing the beginning of what over the next few years will be a very contentious relationship between local governments and Beijing.”

This does not bode well for Beijing and Xi, especially as the U.S. rhetoric, sanctions on chip manufacturing and arming of Taiwan is picking up pace. There is a real existential threat to the Chinese Communist Party appearing.

We had Andreas Steno on the show a few weeks ago, because I wanted to hear his sober analysis of the European energy crisis. He was the one analyst I saw pushing back against the panic narrative.

He is back in the form of a tweet thread this week and on the show I quickly read through the highlights. They are:

What struck me about this analysis is how much it reminded me of the April 2020 oil futures crash. At the time, oil storage was full and tankers were loitering around the world — also full. There was simply no place to take delivery of the futures contracts, so holders had to sell at any price, causing a flash crash to zero.

Could we see the same thing in Europe this month? Not quite yet, but it is at least a possibility. What a clown world turn of events. From massive record highs to a zero price being a possibility in a matter of months.

This is a guest post by Ansel Lindner. Opinions expressed are entirely their own and do not necessarily reflect those of BTC Inc. or Bitcoin Magazine.