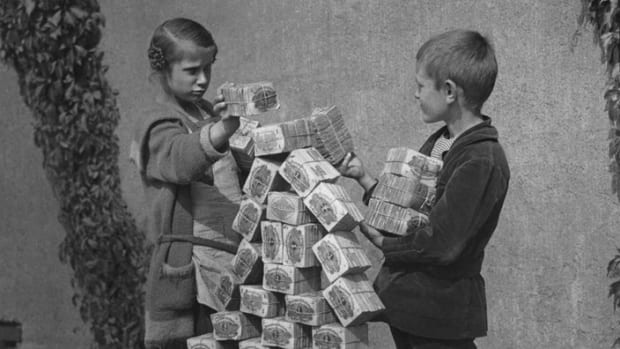 Bitcoin is a beacon of hope in a world of uncertainty and despair. By having a monetary constant, people can focus on things that really matter.

This is an opinion editorial by Leon Wankum, one of the first financial economics students to write a thesis about Bitcoin in 2015.

This article is the second in a series in which I aim to explain some of the benefits of utilizing bitcoin as a “tool.” The possibilities are endless. I selected three areas where bitcoin has helped me. This article describes how bitcoin has made me more optimistic about the future because it allowed me to efficiently manage my money and build savings. I’ve developed a lower time preference, meaning I value the future more, which leads me to act more mindfully in the present. All of this has had a positive impact on my mental health.

The Horrors Of Inflation

When money loses value, it negatively affects a society. This process can be observed in countries with high inflation. A tragic historical example is the hyperinflation in the Weimar Republic, the government of Germany from 1918 to 1933. Germany lost World War I and was forced to pay massive reparations. Germany then slid into a financial crisis. In order to stimulate the economy and pay the reparation debts, the German national bank, the Reichsbank, printed vast amounts of money. Their money was devalued so massively that people lost all their savings and the country went into an economic crisis. In 1922, a loaf of bread cost around 160 marks, by the end of 1923, it cost 200,000,000,000. By November 1923, one U.S. dollar was worth 4,210,500,000,000 German marks.

As a result of the inflation, Germans went into despair. The population was frustrated, and the resulting inequality led to a rise in populism. Adolf Hitler took advantage of this distress and manipulated the masses into believing that he and his Nazi henchmen could restore Germany to its former glory. His reign in Germany was marked by atrocities and ended in one of the most brutal wars of annihilation in human history. This makes it clear that the devaluation of money leads to the devaluation of society and ultimately to the devaluation of everything — including human lives as the crimes in Germany, the horrors of World War II and the Holocaust have shown.

That was the case in the Weimar Republic and is still the case today. Financial uncertainty and monetary inflation around the world are making it increasingly difficult to save, build wealth and plan for the future. An epidemic of despair and fear is sweeping the world. One might think that central banks have learned from the past, but that is unfortunately not the case. A tragic example is Lebanon: The Banque du Liban, Lebanon’s central bank, has circulated a surplus of Lebanese currency in recent years in response to a deepening economic crisis that has plagued the country since 2019, plunging three-quarters of its population into poverty. As expected, excessive money printing has made matters worse. The inflation rate in 2021 was 154%. The inflation forecast for 2022 is 178%. Even though people have more money at their disposal, everything is getting more expensive in real terms.

With the state running out of money and afraid of a bank run, it restricted citizens’ access to the banking system. In response, on September 14, 2022, Sali Hafiz, a young Lebanese activist, robbed a Beirut bank to demand her own savings so she could pay for treatment for her ill sister, which the bank apparently refused to hand over to her. This brings up the question: How can it be that a young woman in the prime of her life is forced to rob a bank? Fear of the future torments the mind.

The cause of the problem is the state monopoly on money. Historically, when governments or central banks fail with their monetary policy, they cling to power by printing money to continue funding their activities. The population then suffers from currency devaluation, price inflation and the resulting uncertainty. Bitcoin works differently. Bitcoin is produced at a rate which was defined when the system was created and which is known to the public. There will never be more than 21,000,000 bitcoin. This certainty carries over to other aspects of life, for example, you can be certain that if you choose to save the fruits of your labor in bitcoin, you will be rewarded in the future because Bitcoin was designed to be disinflationary. With bitcoin, you can provide for your future self, your kids and your loved ones. When you’re old and less productive, you have savings with which to live. More importantly, no authority can prevent you from owning, storing or sending bitcoin. The absolute ownership that we have in bitcoin is unprecedented and a cause for great hope.

Bitcoin is a monetary constant. Like other constants in the universe, it creates a foundation upon which humanity can interpret information to look forward to the future with confidence. Ideally, money should give a sense of certainty about the future. Bitcoin does that. Yes, the bitcoin price is volatile, but accepting greater uncertainty in the short term is worth gaining greater certainty in the long run. Bitcoin can make us optimistic about the future.

Dr. Saifedean Ammous has written about the impact of soft and hard money on time preference and how that core monetary instinct can spread to other behaviors like choosing what to eat, how to build and the value of art and culture. A society that is using soft money is subconsciously infused with the realization that value melts away and must be spent quickly. It will favor immediacy, sacrificing the future in search for gratification now. For example, from its inception, the euro’s operating philosophy was to predictably lose 2% of its purchasing value annually.

Bitcoin offers an alternative as it is inherently disinflationary. Money that cannot be inflated at will rewards good behavior, low time preference, high savings, planning and responsibility. Bitcoin offers a world that promotes saving for your future self and family; a world that will allow you, your family and your community to plan for generations. “Bitcoin promotes human potential through its emotionless enforcement of consensus-based rules that give us predictability, and by extension, reliability.”

Most importantly, as so eloquently described by John Vallis in a conversation with Peter McCormack on the “What Bitcoin Did” podcast, Bitcoin causes us to have a more hopeful vision of the future. Vallis explains how many people are more optimistic with “a greater felt sense of freedom because of the qualities of bitcoin and what using it allows for is causing people to: 1. Take more responsibility and 2. See a different future on the horizon than they had seen before.”

Later in the episode, Vallis said:

Bitcoin allows us to ascend to a higher version of ourselves, because we feel a level or certainty and are less scared of the future. With a bitcoin standard, these qualities will change society.

Most Bitcoiners I know, including myself, have experienced a transformation since embracing bitcoin. Like most people around me, I used to worry about the future. Today, I feel optimistic about my future self because I know bitcoin will reward me. I can now concentrate on doing what I love, which allows me to bring the greatest value to the outside world. Learning how to utilize bitcoin’s potential has allowed me to focus on what I believe is truly important. This has brought a new level of consistency to my life that keeps me grounded and energized.

Dr. Ammous explained how Bitcoin has the potential to change people on his podcast “The Bitcoin Standard” in a conversation with Tarek El Diwany and Allen Farrington in a way that resonated with me because it reflects my personal Bitcoin journey:

The value of bitcoin allowed me to value myself more. For years now, I haven’t drank or partied and instead put that money into bitcoin. With that refocus, my time preference has completely changed. Instead of valuing things that bring short-term satisfaction, I value things that will make me happy in the long term. Instead of partying every weekend, I understand the value of using my time during the week. I don’t use the weekend to escape my week, I now use it as an extension to accomplish my goals. As Dr. Ammous says in the podcast, Bitcoiners have grand visions of dynasties and building generational wealth.

Many people with fiat mindsets don’t think that far out. Interestingly, those with a fiat mindest don’t understand Bitcoin. They have a very short time preference and only see the day-to-day price fluctuations and not the long-term gains. Fiat people are running on a treadmill that does not allow them to see past the next weekend because there is no easy way for them to provide for the future. With bitcoin, there is. With bitcoin, time preferences lengthen and people can value the future, which allows us to value the present. Whether you agree or disagree with this, I have met a few Bitcoiners that have gone through major mental changes after holding bitcoin for at least five years.

Bitcoin can be a tool to find optimism, if we are willing to use it accordingly. This self-responsibility is at the core of Bitcoin’s philosophy. The first step is to accept that the current economic model we live in is not the best one possible. The next step is to actively use and research bitcoin. This makes you face yourself because you begin to actively engage with the reality you live in and you start to question your own actions. The beginning of the Bitcoin journey might be hard, because of bitcoin’s volatility, which contrasts with the perceived safety of the current system and might be unsettling at first. However, as time goes by (and bitcoin increases in price), satisfaction and security sets in. This can have a positive impact on mental health as there is less tension and worry, which can lead to a more optimistic view of the future.

With bitcoin, you have to learn to deal with uncertainty. Something that actually belongs to being human, but is seen as bad by the existing system. We are used to high time preference. Everything needs to happen fast. A system like Bitcoin, which takes time to evolve, creates angst. However, that is a lesson that teaches you how to be more patient, financially responsible, self-determined and independent — virtues that we don’t necessarily learn through our existing financial system.

This is a guest post by Leon Wankum. Opinions expressed are entirely their own and do not necessarily reflect those of BTC Inc. or Bitcoin Magazine.