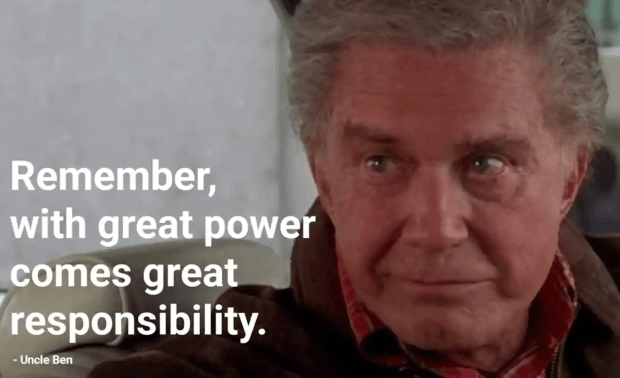 Without responsibility, freedom is meaningless. So Bitcoin is not just freedom money, it is responsible money, powered by RGU technology.

This is an opinion editorial by Aleks Svetski, author of “The UnCommunist Manifesto,” founder of The Bitcoin Times and Host of the “Wake Up Podcast with Svetski.”

Bitcoin is a combination of many innovations — technological, mathematical and scientific. It, of course, includes cryptography, timestamping, hashing and proof of work, the combination of which has given rise to new forms of technology, namely the timechain, number go up (NGU) technology and what I believe is perhaps the most important of all: responsibility go up (RGU) technology.

I came to Bitcoin for “the money” and I stayed for “The Money.” The Money being the most important social invention/discovery/tool known to the greatest social beast of all, i.e., man.

I have always been a Freedom Maximalist. This posture led me on quite a journey in life with more than my fair share of ups and downs. I’ve won and lost big, more times than I can count — in business, finance, relationships and just about every other area of life. When I look back on the years, one thing that stands out:

The experiences that felt most sound, just and true were the ones where I was maximally free and maximally responsible for the result. Whether good or bad, and for better or worse.

I don’t think I appreciated the latter, at least consciously, when I was younger. The circumstances of my life generally positioned me to be largely responsible anyway, but if I am honest, I spent most of my time focusing on the freedom aspect and as a result, renounced my fair share of responsibility along the way.

The older and more mature I’ve become, the more I have come to respect, desire and ultimately seek responsibility.

Jordan Peterson planted a significant seed. I remember listening to short clips of his while training at the gym. A period in particular that comes to mind was 2020. Some significant events occurred, derailing my life, so I would lift heavy and punish myself at the gym while listening to this man drum doctrines of responsibility, truth and integrity into my head.

It was a profound and transformative period of my life.

Putting in the time and effort to understand Bitcoin, Austrian economics, history and masculine frame (hat tip, Jerr), has also significantly deepened my position on “responsibility.” As has watching the injustice and sheer lunacy of clown world.

Here I am now in late 2022, recently married, and looking to take the most responsible step of my life yet: to have kids and build a dynasty with my beautiful wife.

As this new chapter unfolds, I’ve found that responsibility has taken a front row seat in terms of importance. Perhaps even more so than freedom. This is something I would never have thought I’d say, but here I am.

Alongside this personal transformation, I have come to realize that Bitcoin itself is even more important than I thought, because it embodies, exudes and epitomizes responsibility.

If Bitcoin is responsible money, then what drives it is RGU technology.

Of course, that’s a meme. And we should treat it as such. In this day and age, we meme things into existence. NGU was the perfect example, as were laser eyes. But let us now add a new one to the lexicon.

NGU was great, is great and will always be great. Bitcoin’s NGU works on so many levels: relative exchange rate (aka, price), block height, node count, hash rate, users and more, although we know that most people focus primarily on the price.

This is where things can fall apart.

If exchange rate is the prime focus, periods of non-NGU price action make you look stupid or feel a little empty. Bitcoiners are ready to endure looking stupid. It is a price worth paying, of course. Not to mention that these rites of passage are both a cleansing and forging. They cull the weak, while sharpening the true believers.

But it’s in the sharpening that we have the opportunity to discover a more moral pursuit. And here is my suggestion: Getting rich is cool and all, winning is great. We will do that anyway. But let’s also rediscover what made our civilisations great in the first place:

I’ve come to believe it is the most mature and evolved of human attributes. With great freedom comes the moral calling for great responsibility. This is the challenge set before all boys who must become men. This is when you transcend the child and enter the adult.

In this sense, Bitcoin is a sign of civilizational maturity. And perhaps on a more macro scale, the tumultuous period we’re in is a sign of humanity in the throes of adolescence. As a species, we are coming to terms with what it means to live in accordance with truth and natural order. We are mid-rite-of-passage, and the infantile part of us that wants to continue playing pretend is throwing a tantrum, kicking, biting and screaming because it knows its time is up.

The fiat era is coming to an end, and like an child in hysterics, it is in a state of panic. But never fear, for this too shall pass. Bitcoin will mature us, because it will not only make freedom great again, but make responsibility great again.

You will find RGU technology embedded in every element of Bitcoin. From the radical custody and methods of storage, through to the fact that there is no “support line” you can call if you’ve lost your keys or sent bitcoin to the wrong address.

The same powerful property rights make you free to do whatever you choose with your wealth, but they also place the onus on you to secure your wealth in such a way that it is not taken, lost or squandered.

Knowing that Bitcoin is a one-way function, and that there is no “rewind button” (as there is in the fantasy game of fiat), it forces you to think twice, no, thrice, about what you are doing. This is maturity. This is what it means to be an adult.

When you run a node, you are Bitcoin. You are the bank. You are responsible for maintaining a copy of the entire ledger.

And it goes further!

Beyond the inherent responsibility of utility and function found in Bitcoin is the effect it has on transforming the user into a more responsible human being. As the owner of your own wealth, you become the steward, the bearer and the guardian. This is power, and we all know what Uncle Ben said to Peter Parker:

What this does in a social sense is profound.

Bitcoin makes the economic game fair. Nobody can win by virtue of a money printer or state monopoly. Such fancy methods of cheating become impotent.

This cuts at the very heart of the irresponsible and short-sighted fiat world we live in. Cheating is irresponsible behavior. When you can play a game and never lose, of course you will shirk responsibility!

When you’re the nation state or central bank and do so, this behavior will spread, until all of civilization is infected with it. People will become simultaneously devoid of individual responsibility while also being responsible for everyone and everything.

That’s where we are now. One big, mindless mass of serfs, playing a strange game of responsibility hot potato.

RGU technology means that consequence is localized. There can be little to no socialization of poor decisions. The onus is on the individual to climb and prosper, within the context of a fair economic game, made so through a radical ownership of one’s wealth.

This is the magic of RGU and what, in fact, makes it similar to NGU. It is embedded within the thing that is Bitcoin, and it also manifests in the external world as what it is.

And the proof is in the pudding.

Bitcoin has inspired enquiry into many other areas of life, from one’s level of ownership and proficiency (or lack thereof) in domains such as food, frame, family, self defense, knowledge, energy, shelter, health and much more, it has fundamentally transformed the people who have come into contact with it.

This incredible side effect of responsible money is staggering.

What Do I Mean By ‘Responsible Money’?

I mean honest money, true money, money whose ledger is accurate and whose custody demands responsibility of the bearer.

Bitcoin, like the force of nature that it is, places the onus on you as the individual to make responsible choices with your time, energy and intent, from custody, through to how you trade the product of your labor, in an interconnected society and economy.

You adapt to the reality of gravity by not jumping off random cliffs, and if you do, you at least (when intending to preserve yourself) wear a parachute. The same is also true when your intention is to end your journey. You can jump off the cliff in the same way you can burn your keys.

Bitcoin marches forward like the procession of time. It does not turn back. It does not forgive, nor does it forget. Mistakes are paid for in full, and there are no second chances. Bitcoin just is. You adapt to that. The result is a scorecard and ledger of utmost responsibility.

A quick note on adaptation: It may well be humanity’s greatest strength and weakness. Humans will either adapt to freedom by taking on more responsibility, or they will adapt to slavery by renouncing it in exchange for (what is often just the illusion or promise of) safety.

The slow, consistent renunciation of responsibility leads inexorably to the erosion of freedom. But it’s very hard to notice early on because comfort and safety feel so nice. The movie “Wall-E” comes to mind when I think about this, as does the 2020 phase of the clown world.

This infantilization of individuals is a regression and de-sophistication of civilization. It is a sickness. Responsible money is the cure.

Bitcoin is the ultimate form of responsible money, and RGU technology is the antidote to the fantasy of fiat and the pretend prosperity of politics.

Embrace it, not just because number go up. Do so because responsibility, the highest of virtues, goes up in you and the world around you.

This is a guest post by Aleks Svetski, author of “The UnCommunist Manifesto,”, founder of The Bitcoin Times and Host of The Wake Up Podcast. Opinions expressed are entirely their own and do not necessarily reflect those of BTC Inc or Bitcoin Magazine.