China Back Among Top 10 Countries In Bitcoin Usage Despite Ban 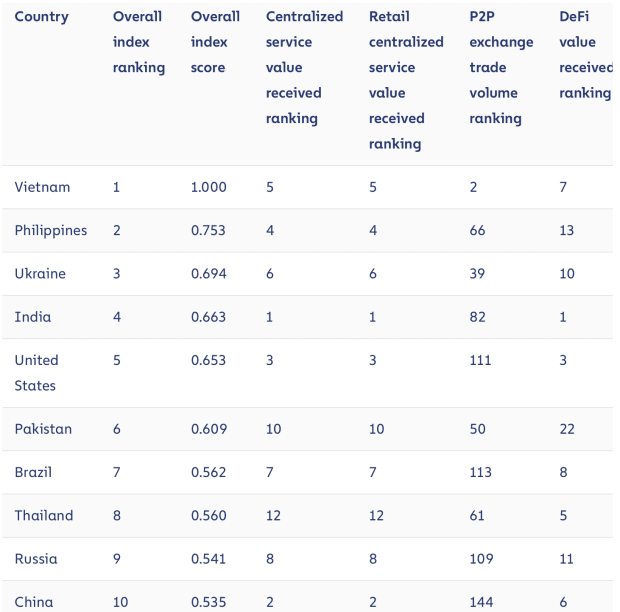 The report’s most staggering bits of information show that, despite last year’s ban, China has returned to rank among the top 10 countries in the world for adoption. Additionally, Vietnam is still ranked first and the U.S. has risen to fifth when it was previously ranked eighth in 2021.

However, when one looks at this report it becomes far more interesting after realizing how Chainalysis ranks adoption. Five separate indexes cumulatively provide the overall index score of each country, and the indexes allow for a weighted calculation based on the percentage of income spent to acquire bitcoin and cryptocurrencies.

Thus, a country with the highest volume accumulated won’t rank as the highest ranking for adoption because it most likely represents a smaller portion of the population’s overall income.

Additionally, a country can have massive amounts of accumulation but rarely participate in the peer-to-peer (P2P) transfer of value, which could lower a country’s rank. This happens to be the case for India who ranks number one in all metrics, except for P2P transfers which led to the country being ranked fourth globally.

Therefore, accounting for a country’s use of bitcoin and cryptocurrencies as not only a store-of-value, but as a medium of exchange, paints a more complete picture regarding adoption. This also accounts for emerging markets making up the bulk of the list as they participate in more P2P transactions.

The report concluded by detailing how adoption is still well above 2020 bull market levels and even though markets have experienced bearish momentum, “Bear markets can’t wipe out bull market adoption.”