We’re In A Bull Market For Off-Chain Bitcoin 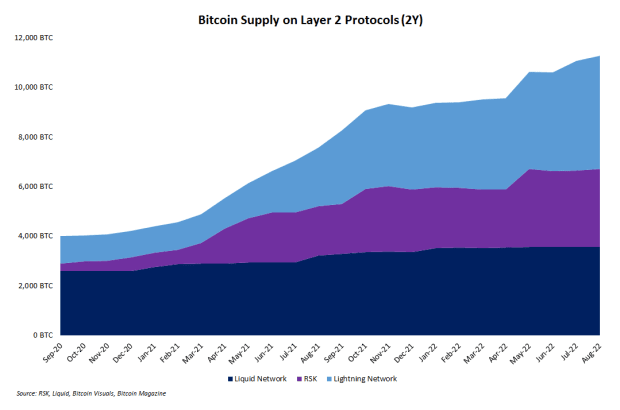 The bitcoin price may be down from its all-time highs, but off-chain uses for bitcoin assets are in their own bull market.

This is an opinion editorial by Zack Voell, a bitcoin mining and markets researcher.

One of the more interesting and controversial developments in the Bitcoin ecosystem is off-chain use cases. Many of these applications are not technologically identical, but they all nonetheless expand the list of potential use cases apart from the Bitcoin base layer for a given bitcoin holder. And some of these products are completely outside the Bitcoin economy altogether.

This article takes no position on the unique merits of any particular off-chain use for Bitcoin, but it summarizes some growth trends and supply data showing growth and adoption across Layer 2 protocols, bitcoin-backed tokens and more. Using bitcoin in these ways is not suited for every investor, but anyone who cares about the broad scope of Bitcoin adopters should take note of these trends to better understand where and how bitcoin are moving.

Before examining some data, this section will hopefully mitigate some of the potential mental blocks or preconceived critiques readers may have about these applications that could color their objective interpretation of data in the following sections.

The catch-all category of “off-chain” bitcoin is not meant to equate or conflate all the later mentioned protocols as identical or even mostly equivalent. But it is a sufficiently workable label for these tools that offer uses for bitcoin that are not directly on the base layer. Some of these uses share characteristics of simply holding assets on a custodial exchange, but a key difference is that almost all of these protocols are not permissioned, closed source or as centralized as exchanges. The following data focuses on these open financial tools for alternative bitcoin uses.

Protocols built in layers of the Bitcoin technology stack above the base layer blockchain are often criticized for their meager adoption. Usually, these criticisms come from proponents of alternative blockchains. But the data shows growth is nonetheless steady even if comparatively slower.

The colored area chart below shows bitcoin supplies on the Lightning Network, Liquid Network and RSK over the past two years. It’s apparent that of these three, some are seeing supply grow faster than others. But the overall growth trajectory is markedly opposite of bitcoin’s current price action. Despite the bear market, adoption continues.

These three “built-on-bitcoin” protocols are not alone, however. Other Bitcoin-adjacent networks like Stacks also support a type of synthetic bitcoin asset. Built with the motto of “unleashing Bitcoin’s full potential,” Stacks announced its offering of a form of wrapped bitcoin in January 2021. The asset uses the ticker symbol xBTC.

It’s no secret that synthetic bitcoin products on other blockchains are often derided on Twitter and not universally used or welcomed by the broader Bitcoin community. But data shows that a non-trivial amount of bitcoin investors are increasingly using bitcoin-backed tokens.

The best example is the growth of Wrapped Bitcoin (WBTC), an ERC-20 token launched by BitGo. The chart below taken from The Block shows the extraordinary growth in WBTC supply over the past two years irrespective of any downward bitcoin price action:

BitGo’s bitcoin-backed token is not the only asset of its kind on Ethereum. Six other teams have launched similar assets, including tBTC, pBTC, renBTC and more. Each one offers slightly different features and protocol architectures to serve different demographics of users.

Ethereum is also not alone in supporting synthetic bitcoin products apart from the Bitcoin blockchain. Other chains launched these products later as gimmicks (e.g., Tron) or to try and imitate the success of Ethereum’s bitcoin-backed tokens (e.g., Solana and Avalanche). But Ethereum is by far the network with the largest amount of synthetic bitcoin assets, in large part thanks to the craze of “DeFi Summer” in 2020.

The bar chart below shows current supplies of synthetic bitcoin on alternative blockchains:

Are These Bitcoin Products ‘Good’?

Mention tokenized bitcoin products in a crowd, and the reactions are sure to be polarized. In orthodox Bitcoin communities, Layer 2 protocols (e.g., Lightning and Liquid) are easy favorites, and their adoption is steady, even if comparatively slow.

So, are these products “good”? All of these off-chain uses for bitcoin present various tradeoffs, but the idiosyncratic utility of each cannot be ignored. Whether or not everyone should pick one way to use their coins is beside the point. Because becoming a reserve asset — of the global fiat economy or the internet-based “crypto” economy — is bitcoin’s most commonly accepted purpose, generally speaking, products that achieve this goal should be encouraged. Lightning pushes utility in the Bitcoin-native economy in the same way that tokenized bitcoin has a clear and direct effect on bitcoin serving as a form of reserve asset for non-Bitcoin-native sectors of the broader cryptocurrency market.

Rehypothecation is another popular concern with most bitcoin financial products. Importantly, this concern does not apply to these off-chain products. The lack of rehypothecation for Lightning products is clear. And, in fact, nearly all of these products built on and apart from the Bitcoin protocol itself are designed to service a one-for-one bitcoin-backed or -swapped asset, whether it’s a simple transference of bitcoin from the base layer to the Lightning Network or a swap of “real” bitcoin for a bitcoin token used on other blockchains. One of the leading tokenized bitcoin products maintained by BitGo, for example, publishes proof of the reserves backing the bitcoin tokens it issues.

The Future Of Off-Chain Bitcoin

Readers who ideologically reject the set of tradeoffs inherent to tokenized bitcoin products will surely not be convinced by anything in this article to change their thinking, nor are they criticized per se in this article. The point of this data and analysis is simply to show that some people (in fact, a consistently growing number) see value in choosing to use their bitcoin somewhere besides the Bitcoin blockchain — and even places outside of the Bitcoin-native economy. After all, HODLing in cold storage is just as valid of a use case as tokenization.