Lightning Shines For Its Practicality 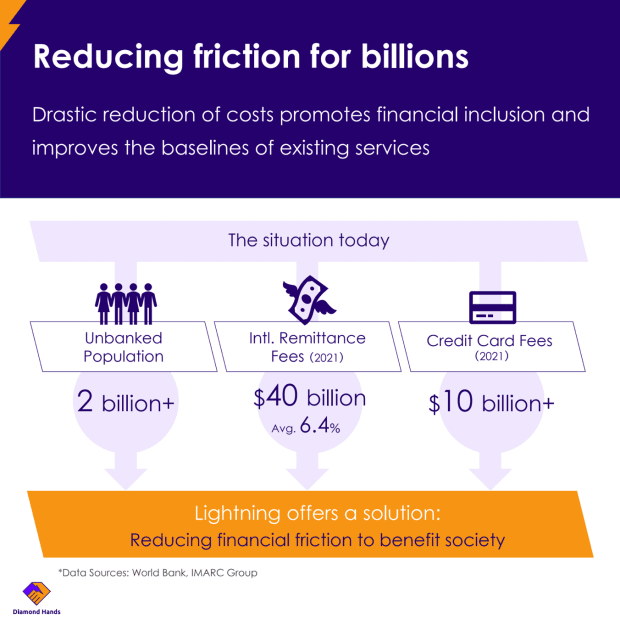 Applications built on top of the Lightning Network allow for micropayments, opening the door for integrations with existing video games and podcasts.

This is an opinion editorial by Koji Higashi, a host of the Diamond Hands community.

This is the second article based on the content of the “Understanding Lightning” report produced by the Diamond Hands community, the largest Lightning Network community in Japan. The report aims to provide an overview of Lightning’s technology and ecosystem for a nontechnical audience. The first article can be found here.

Applications that integrate Lightning payments can immediately reap the benefits of micropayment capacity, low fees and instant settlement. Since Lightning takes the majority of payments off the main Bitcoin blockchain, it can theoretically process millions of transactions per second while maintaining Bitcoin’s decentralized and permissionless nature — both essential to serve as the underlying technology for real-world practical applications.

Significant reduction in transaction costs and an increase in speed at a global scale with Lightning is no small feat. It can potentially serve billions of unbanked and/or underbanked people as well as cutting billions of dollars worth of costs in credit card fees alone.

With all this said, the cryptocurrency industry as a whole, or now popularly referred to as “Web3,” seems to focus more on different types of applications with proprietary tokens closely integrated into the core of the service.

Indeed, Web3 projects with built-in tokens tend to have an easier time raising funds from venture capitalists and achieving ultra fast growth, thanks to the speculative nature of tokens and expectation of big gains for early investors and users. In that aspect, Lightning applications certainly underdeliver.

Although many Lightning applications utilize the Lightning Network to distribute small amounts of bitcoin (sats) to users, they won’t make you rich quickly — unlike some Web3 projects with tokens occasionally do if you’re lucky (or if you are an insider, to be more specific).

Of course, not everything is perfect with Web3.

Tokens are often too strong an incentive and can easily alter the purpose of using the service itself, damaging the overall product as a result. It blurs the line between the app’s actual utility and short-term speculative demand, often attracting the wrong type of users who don’t care about the service.

In other words, applications with an existent user base may risk hurting actual loyal users by integrating tokens into the core of their service. Understanding this, it’s not surprising that established game studios like Blizzard openly reject integrating NFTs into their platform.

What Lightning Apps Bring To The Table

On the other hand, integrating Lightning payments in existing services are less likely to conflict with the existing product design, rather enhancing user experience and satisfaction.

For example, Zebedee, one of the leading Lightning companies for gaming, is working to integrate microbitcoin rewards in existing game titles, easily turning them into “play-to-earn games” with real bitcoin.

These rewards are relatively small and you won’t be able to make a living off of them. Instead, plugging in microbitcoin rewards can improve user retention and lower user acquisition cost, making distribution of microrewards economically feasible and sustainable for game developers.

The logic here is pretty simple, in my opinion. You are not really playing purely for money, but if you play some games for fun anyway, you’d rather earn some sats while doing so.

Both of these use cases don’t disrupt the original purpose of using the service itself. Lightning’s microrewards work as a gentle nudge to continue to do what they enjoy doing anyways, as opposed to trying to make people play boring games or listen to distasteful podcasts purely for the sake of receiving tokens and making quick money.

While we expect even more novel use cases to be discovered in the future, there are already a number of concrete use cases that leverage Lightning in remittances, inter-exchange transfers, microrewards, gaming and more, reducing transaction cost and improving user experience.

Lightning can be an effective tool to elevate products with real utility and existing user bases although it may not be powerful enough to achieve rapid monetary growth from zero, like some Web3 projects are designed to achieve through pump-and-dump schemes.

The jury is still out whether those Web3 apps can achieve both initial hypergrowth and long-term sustainability, but, to me, Lightning apps and Web3 serve different purposes and fulfill different needs, with different technical architecture and tradeoffs anyway.

We should accept these differences and build even more interesting and cool use cases with Lightning in the future.

This is a guest post by Koji Higashi. Opinions expressed are entirely their own and do not necessarily reflect those of BTC Inc. or Bitcoin Magazine.