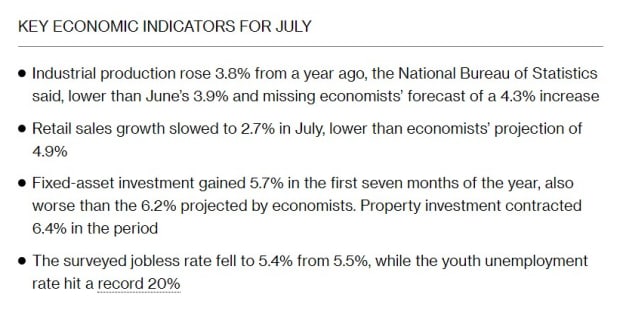 Jamie Dimon’s leaked comments with predictions for the global economy and geopolitics paint a bleak picture about the state of the economy at large.

“Fed Watch” is a macro podcast, true to bitcoin’s rebel nature. Each episode we question mainstream and Bitcoin narratives by examining current events in macro from across the globe, with an emphasis on central banks and currencies.

In this episode, Christian Keroles and I dive into the surprise rate cuts by the People’s Bank of China (PBOC) and read through some of Jamie Dimon’s recently leaked comments about the global economy and geopolitics.

After a brief look at the bitcoin chart, we begin discussing the July 2022 economic numbers from China. I read off a Bloomberg article with the headline, “China Shocks With Rate Cut as Data Show ‘Alarming’ Slowdown.”

Up and down the data release, the Chinese economy performed worse than last month and far below estimates. After decades of industrial production rising in China at high single or even double digits, it is underperforming bearish estimates at only 3.8% year-over-year.

Other important metrics for the Chinese economy is retail sales growth, as they attempt to break out of the middle-income trap, and become a consumption-led economy. Growth was horrible at only 2.7%, with a projection of 4.9%.

The property and real estate sector posted a 6.4% decline, which is likely a rosy reading. In recent episodes, we’ve shown how the Chinese real estate market, like new home sales, has crashed by 30% month-other-month in recent months. This is absolutely devastating for a sector built around presales and which is trapped in a slow-motion credit default.

The last update for China this week is that the PBOC also cut their two short-term policy rates, each by 10 basis points. It’s not much, but it puts them in direct opposition to other central banks, who are pursuing a path of tightening.

As you can see in the chart below, the PBOC has been consistently cutting rates since long before COVID. This recent weakness might be blamed on their zero-COVID policy, but the data shows that China is experiencing only a return to trend — a trend that is heading toward a financial crisis.

In the chart below, we can see the growth rate in the last 25 years of Chinese gross domestic product. Growth fundamentally changed in China during the Global Financial Crisis and has been trending down ever since. COVID was a massive shock, but now things are settling back on trend toward a crisis.

I know Jamie Dimon is not the most popular man in the Bitcoin community, but he is a heavyweight in the world of banking and finance. That is why, when some of his comments to high-net-worth clients leaked this week, we should at least examine what he said. I’ll also note, Jamie Dimon is the CEO of JPMorgan Chase and the Wall Street banks influences the Federal Reserve. It is likely that this is similar to what we’d hear from a candid conversation with Jerome Powell.

He was also uncertain about the path of the consumer price index and Fed policy. Important here because Powell is likely also uncertain.

Dimon was much more certain on other things, China for example. He said, “China has serious issues,” and “Autocratic management can work in certain things, but doesn’t work in the long run.” Following that up with, “I think it is a mistake to say that America has the short end of the stick.”

We might view Jamie Dimon as the stereotypical Davos Man, friendly to the World Economic Forum and their agenda, but in these comments he blasts environmental, social and governance (ESG) and recommends pumping more oil in the U.S. He implied that more, rather than less, oil from the U.S. is better for the environment.

Lastly, Dimon even made some comments on “woke capitalism” the hallmark of the ESG movement. It was a little unclear what his direct thoughts were, but he certainly prefers abandoning policies that are tearing us apart and hurting the economy. Instead, he wants to focus on coming together and supporting each other.

Don’t forget to check out the “Fed Watch Clips” channel on YouTube.

This is a guest post by Ansel Lindner. Opinions expressed are entirely their own and do not necessarily reflect those of BTC Inc. or Bitcoin Magazine.