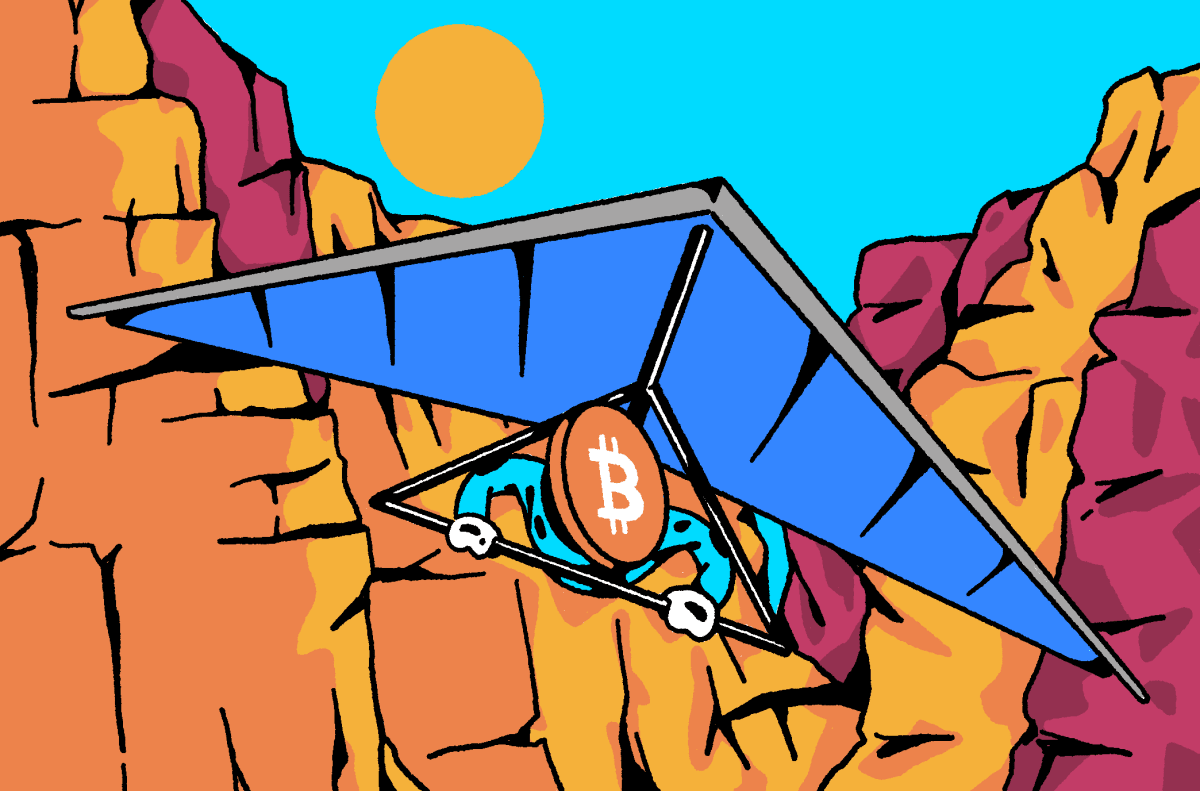 New Bitcoiners are likely upset with the bitcoin price right now, but we’ve been here before and there are some silver linings.

This is an opinion editorial by Stephan Livera, host of the “Stephan Livera Podcast” and managing director of Swan Bitcoin International.

Some newer Bitcoiners could be upset about what’s gone on lately, especially if they were expecting very high highs for bitcoin or no large drawdowns. It seems like in the last few weeks, it has become evident that this is, in fact, a bear/sideways market.

From peak to trough, we’ve seen a 75% drop from $69,000 to around $17,600. We’ve seen a “crypto contagion” of sorts, with the blow-up of the Luna/UST ponzi, the liquidation of Three Arrows Capital (3AC) and other “crypto” market participants undergoing stress, such as Celsius stopping withdrawals and other entities having exposure to 3AC (e.g., Voyager, BlockFi).

Recognizing where we are in the cycle can take a few months. It was similar in early 2018 after the $20,000 high in December 2017. Bitcoin’s price was bouncing around in the teens, and it was halfway through 2018 when it finally became clear to most people that it was a bear market. So, while bitcoin’s high of $69,000 last year was quite lofty, it was arguably the blow-up of Luna that kicked off the crypto contagion and made it more apparent that this is a bear market. After Luna blew up and the Luna 2.0 attempt fell flat, we saw Celsius block withdrawals. This became a stinging reminder to many a yield-chaser about the crucial lesson: “Not your keys, not your coins.”

There was a commonly-quoted statistic, „If you bought bitcoin and held for four years, you were never down,“ which is no longer valid. Now, if we cherry pick, you could have purchased the December 2017 high of $19,600 and held through to the recent crash to $17,300. You’d be underwater over a roughly four-and-a-half-year period. In fairness, few people would actually be in this scenario, but nevertheless, it does change the statistic.

So, What Is The Silver Lining Here?

Firstly, concerning the above “four-year HODLer” statistic, while it’s fair to say that specific cherry-picked individuals are down over a four-year period, it’s still true that all four-year regular stackers are up. Why is this so? Because people’s memories seem to be distorted to the highs of cycles.

While the macro environment is challenging, investors worldwide are struggling to find a place to store their wealth. So, while the 60/40 stocks and bonds portfolio is having some of its worst times on record, and inflation is running high all around the world, this is precisely the time that traditional investors will be open to reconsidering their allocations. It’s also fair to say that bitcoin has already gone through its deleveraging cycle, while the pain in other asset classes may still continue. With all this pain in the bond markets, it’s completely reasonable for bond investors to decide they’d rather purchase some bitcoin, an asset that can’t be easily manipulated by governments and central banks around the world.

There’s another silver lining: people get another chance to stack cheaply. Those who say “early Bitcoiners had an unfair opportunity to get coins cheap or easy” have less ground to stand on. Bitcoin right now is relatively cheap and it’s a great chance to take ownership of some sats and stack them in your cold storage.

Then, maybe in a few years time, people will look back and say how “lucky” you were to be stacking in the $20,000 range. The reality of it is that any long-term HODLer or stacker has had to go through big peak-to-trough drawdowns. Bitcoin is no stranger to 80% drawdowns, with three in its lifetime so far, and with many lesser drawdowns of “only” 50%. I accept this volatility as the price to be paid for Bitcoin’s incredible qualities and increased purchasing power over the long term.

Even with the price around $21,000 in June 2022, the 10-year compound annual growth rate (CAGR) is around 120% per year. Can you even think of an asset class or index that outperformed this?

As the trope goes, bear markets are great for building. There will be a whole new crop of people who learned their lesson the hard way with Luna, Celsius, 3AC, Voyager, etc., and some fraction of them will now be ready to improve their technical knowledge of Bitcoin. They may even start building something in the Bitcoin ecosystem.

Whether you want to build a company, grow your local meetup, or find a Bitcoin job, now is a great time. You might take this opportunity to connect with local Bitcoiners in your area to get the local Bitcoin meetup going, help onboard local merchants to accept bitcoin/Lightning Network payments, and practice your skills in event organization or Bitcoin education and presentation. Bear markets are often when you can find out who is truly committed to the cause, and this may help find the right kind of people to work with or learn from. Bear markets are also a time when experienced Bitcoiners can help new Bitcoiners going through their first bear market at the local meetup.

When the cycle turns and the bull market is back, you’re now in a better position having already built up your skills, meetup group, venture, business or project. You might have already established a small but loyal user base for your Bitcoin project, and they may help with contribution on the project or help share the word about it to their friends. If you’ve done a good enough job building your product or service, Bitcoiners will recommend it to their families and friends and you can “catch the next wave” in the next bull cycle.

Building On Bitcoin In The Bear Market

The wallets are getting easier to use and more reliable, too. For newcoiners, Muun Wallet is a great fast setup choice because it really smooths over the difference between on-chain funds and Lightning. This makes it very easy for a new Bitcoiner to self custody, and also experience the “magic” of fast and cheap Lightning payments. In years gone by, doing larger payments on Lightning wasn’t so reliable unless you already had big channels, and new users would often get confused because they didn’t have inbound liquidity to receive a payment. But these things are improving over time, as wallets iterate and make the experience for new users smoother and easier.

We have the concept of Lightning service providers (LSPs), which are helping users with inbound liquidity/channels to permit them to receive sats quickly. We have the concept of “turbo channels” (aka, zero-confirmation channels) to help them receive/spend coins without waiting for the channel to confirm on-chain first (note: there are tradeoffs here, and you can disable this if you’re not comfortable with the trust assumptions. Generally, this is only done in specific scenarios to control the risk). I believe it now makes sense to onboard most western world newcoiners with non-custodial, Lightning-enabled mobile wallets and services, e.g., Muun, Phoenix and Breez.

If there was ever a time to grow the peer-to-peer and/or circular economy of Bitcoin, and help businesses and individuals directly sell their products and services for bitcoin, this is it. We’re seeing large services with millions of users enable Lightning, such as Cash App, Bitfinex, Kraken, Paxful, Chivo, OKcoin and other smaller companies. Robinhood stated it is enabling Lightning at Bitcoin 2022. So, upwards of 50 million people can spend with Lightning, even if many of those people don’t know it or understand yet! Bitcoin startups such as Oshi are helping Bitcoiners grow the Bitcoin merchant scene in their local area, and we see the likes of OpenNode and IBEX Mercado making their solution available for merchants, too.

The Growing Philosophies Of Bitcoin

After seeing so many companies in the “crypto” space going through troubling times with stoppage of withdrawals and taking losses on loans or tokens, the “not your keys, not your coins” message will resonate strongly. Those who thought they were geniuses in the bull market for getting yield on their coins will now be ready to hear the message of using Bitcoin with their own wallets. It will be easier to make the argument for self custody versus the unsustainable or irresponsibly-risky yield being offered on “crypto” platforms. This may serve a lesson similar to how Mt. Gox’s failure in 2013 led to a resurgence in interest in self custody, and it was an easy, recent story that could be told to explain the dangers of custodial-ism and fractional reserve.

The human rights aspect of Bitcoin is growing, too. One great recent example is the Human Rights Foundation’s (HRF’s) Oslo Freedom Forum (OFF), which I attended recently. There, I heard stories of activists, journalists and technologists who are putting themselves on the line to fight tyranny. And in many cases, the speakers and attendees at OFF could instantly see the value proposition of being able to use Bitcoin, whether that is for fundraising or operating under adversarial conditions. This year, there was a Bitcoin academy, where Bitcoiners were teaching various aspects of how to use Bitcoin, bitcoin and privacy, and quickly setting up BTCPay Server.

It’s interesting that in parts of the western world, Bitcoin is derided as being just a plaything of the rich tech bros and high-net-worth speculators. But at HRF’s OFF, there were people from so many different countries, such as Togo, Ethiopia, Afghanistan and Ukraine, all whom were using Bitcoin. And this could be either because they were dealing with authoritarian bank control or with inflation destroying their savings. I found that the HRF as an organization helps place Bitcoin and freedom in the proper context. While Twitter blue checks in the western world wring their hands about Bitcoin energy use or inequality, there are 1.7 billion people in the world who are unbanked, with many living under high inflation. Sergej Kotliar from Bitrefill also had an excellent thread on what we’re really doing on here:

So, while irresponsible shitcoiners and degenerate yield farmers may have caused this recent sell down in bitcoin’s price, another silver lining is that the industry may now advance with a deeper appreciation for full reserve banking. We may see renewed interest in proof of reserves techniques so that exchanges and service providers may prove their bitcoin balances. We will also see more interest in non-custodial adoption. Instead of chasing “6% yield on your stables” only to be down in purchasing power anyway thanks to high inflation, we will continue growing out the Bitcoin ecosystem.

Remember that bitcoin spends a lot of time not at all-time highs. But when bitcoin is off the all-time high, traditional media love to remind us of this fact. And yet the funny thing is, bitcoin is still dramatically up versus most other assets over the long term, it’s just not up by as much as it was recently.

So, at the end of the day, we’ve been here before, and we’ll be here again. Take it as an opportunity to stack sats, continue building, continue educating and advocating, and in a few years you will look back and realize that you made the right decision.

This is a guest post by Stephan Livera. Opinions expressed are entirely their own and do not necessarily reflect those of BTC Inc or Bitcoin Magazine.