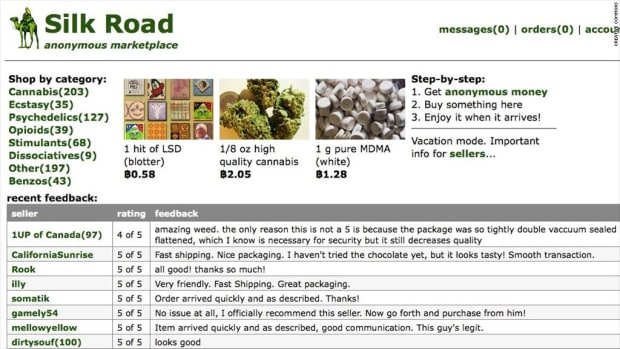 A deep dive into how Bitcoin’s lack of privacy and, by extension, its insufficient fungibility has led to its loss of market share in darknet markets.

If you wanted to buy contraband online in the last five years or so, you may have noticed that the option to pay in bitcoin — once the most popular form of payment on darknet markets — is slowly disappearing.

You may ask why it matters to you or the average Bitcoin enthusiast. (You’re presumably an excellent, law abiding citizen — good for you, but that is irrelevant.) Allow me to explain.

The first major milestone of bitcoin was to be accepted as a form of money. This happened with small obscure merchants at the early stages, but as the word spread, bitcoin found itself as the “official” currency of the darknet, and allowed the creation of a market called “Silk Road.”

Silk Road was a revolutionary online marketplace. Merchants from all around the world could transact from the comfort of their own home, whenever they wanted, and could sell (and customers could buy) whatever they wanted, all with a new form of uncensorable, decentralized and easy-to-use form of money: bitcoin.

Bitcoin’s adoption depended on markets like Silk Road to pioneer, and what was special about Silk Road is that it was an almost completely free (as in freedom) market. Free markets are excellent for adoption because they don’t require bureaucracy, permits, regulations or any other form of permission to run. The less permission required, the better a market can function. Therefore, there is more adoption, more merchants and more bitcoin use.

Without markets like Silk Road, bitcoin’s adoption is at risk, and the network is not as efficient as it could be.

The importance of Silk Road in Bitcoin’s history is, without a doubt, massive since it pioneered bitcoin’s use as a medium of exchange, and still remains the biggest bitcoin goods and services marketplace in history.

Now that you have a decent idea on why such markets are so important, I’ll do my best to explain why bitcoin is not used there anymore.

The Concept Of Fungibility And Why It Matters

According to the Merriam-Webster dictionary, fungible means “being something (such as money or a commodity) of such a nature that one part or quantity may be replaced by another equal part or quantity in paying a debt or settling an account.” This is untrue of bitcoin.

Each coin has its own history, and that history may be accounted for when a user tries to use his coins. That history could also lead to the user getting in trouble when using/holding coins that were used in a criminal manner, for example drug trade or an exchange hack.

In darknet markets, privacy is of high importance. Sellers and buyers want to protect their privacy in order to guarantee their safety when transacting. Law enforcement is not too kind to these types of markets and constantly monitors the websites and merchants for privacy leaks.

By default, bitcoin has weak privacy, and therefore is not fungible. Data and metadata from the Bitcoin timechain can be linked together with off-chain data to form solid evidence against a defendant in court. There have been cases that relied on bitcoin’s lack of privacy as conclusive evidence of what the government sees as “wrong-doing.” Naturally, darknet markets were looking for solutions.

Should Bitcoin developers add privacy via hard fork or would a soft fork be sufficient? Should privacy be on the application level rather than on the protocol level?

The truth is that most people, especially the administrators and merchants of darknet markets, do not care. They just want privacy. That’s one of the reasons bitcoin is losing darknet market share to other cryptocurrencies that have figured this out already.

Unlike other sectors, there is a lot of competition in darknet markets, especially when it comes to methods of transacting. Markets rise and fall and so do the payment methods used in them.

Prior to 2015, bitcoin used to hold most of the market share in darknet markets, followed only by fiat currency.

After the fall of many markets and their vendors because of bitcoin’s privacy flaws and bad operational security, the use of bitcoin was starting to drop. Other cryptocurrencies, like monero, started to emerge on darknet markets because they better fit the use case. They had something that bitcoin does not, privacy by default.

In retrospect, bitcoin’s focus on being a store of value overlapped with the development of the required privacy for darknet market use.

Still, there are many attempts at enhancing bitcoin’s privacy, and I’ll do my best to list the most prominent of them:

Custodial tumblers were an early solution to bitcoin’s lack of privacy. There will usually be a centralized server that gathers bitcoin from customers and dispenses them randomly to unlink the customer from the bitcoin they sent.

Those have multiple flaws and massive third-party risks, and they are also often honeypots set up by law enforcement to catch dirty bitcoin and surveil on users.

There’s also tumbling with services that are not aware of it: This is a long process where the user will mix their bitcoin with other users‘ bitcoin by sending funds to exchanges, online casinos and other sites that hold a large amount of bitcoin. This has the same flaws as custodial mixers.

A CoinJoin is a collaborative transaction that combines users‘ coins in order to create a large anonymity set for them. This increases the privacy of all participants.

This is by far the most effective method for privacy on Bitcoin and has been used heavily on darknet markets as well as outside of them.

This one is a very important tool in the tech stack of a Bitcoiner, and I encourage you to learn about it and use it.

There are also “fake” CoinJoins who leverage heuristics to confuse on-chain analysis into believing a transaction made by only one person is actually an elaborate CoinJoin.

Bitcoin stealth addresses, prominently BIP47, introduced a way to have a stealth, reusable address that only discloses the real address of the user when a notification transaction was made.

This creates a new Bitcoin address for each user you connect with to ensure privacy. This was never widely used in darknet markets, but it’s decent tech nonetheless and a personal favorite of mine.

The Lightning Network is a Bitcoin Layer 2 with a focus on providing fast, cheap and arguably private payments with instant settlement. Currently, the privacy on Lightning is great for senders, partially solving Bitcoin’s fungibility issue on-chain.

Unfortunately, Lightning has privacy flaws when it comes to receiving money. For instance, the receiver needs to provide his “channel point” when creating an invoice. A channel point is the UTXO on the blockchain that is used to back the channel with on-chain bitcoin; that means that the sender can view the receiver’s on-chain transaction history.

Merchants, especially in environments such as darknet markets are looking for simplicity, something that Lightning doesn’t currently provide.

Arguably, the reasons above are why Lightning is not currently integrated into any darknet market. There’s also a concern with the complications that come with running a Lightning node as a merchant.

There is some room for optimism though, as there are currently teams that are working on enhancing both the receiver’s and sender’s privacy, as well as the user experience issues mentioned above. This could potentially make it much more attractive to darknet markets in the future.

What Can We Do To Fix This?

I can not stress enough how important it is that we have decent privacy on Bitcoin that everyone can take advantage of. The solution is within Bitcoin’s culture and community. There are app-level privacy upgrades that can be standardized to improve overall privacy on the network.

CoinJoins of all sorts, stealth address solutions like silent payments and BIP47, and encouraging users to run their own node and use non-custodial and open-source software where they can.

When transacting, make sure it’s peer-to-peer and not through an exchange or other intermediary. Never use a custodial wallet — you can not ensure your privacy if you count on a third party to take care of it for you. Also, when acquiring bitcoin make sure to use a non-KYC (know-your-customer) exchange. Otherwise, your data and privacy could be at risk.

My advice is to do your own research and make sure to take every precaution when using bitcoin to ensure your own privacy.

The more people that use bitcoin privately, the better privacy everyone gets, and the more likely it is that bitcoin will emerge again as the prominent currency of the darknet markets, and consequently of other markets too.

This is a guest post by Wildsnow. Opinions expressed are entirely their own and do not necessarily reflect those of BTC Inc. or Bitcoin Magazine.