Going Down With The Ship: Bitcoin Or Nothing 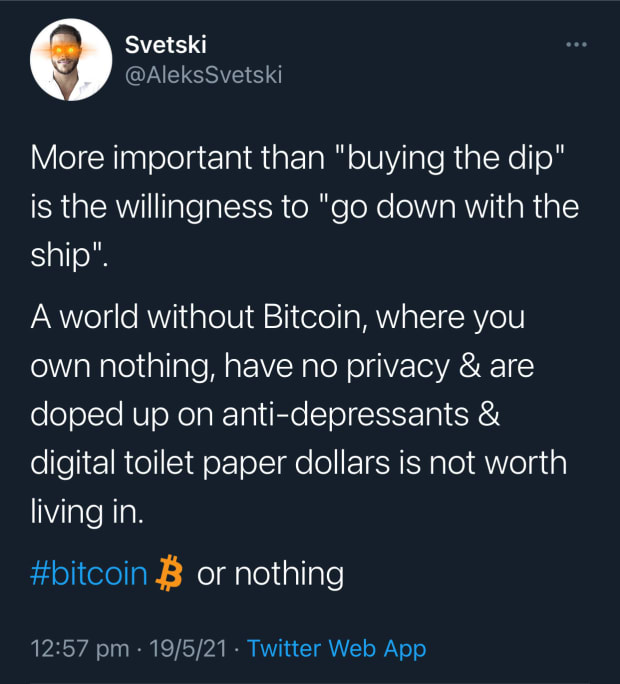 A world without Bitcoin, where you own nothing and have no privacy, is not worth living in. A reminder and dedication for Bitcoin’s classes of 2019, 2020 and 2021.

This is an opinion editorial by Aleks Svetski, author of “The UnCommunist Manifesto,” founder of The Bitcoin Times and Host of the “Wake Up Podcast with Svetski.”

It’s times like this when a little written copium, blended with some philosophically-infused hopium is just what the doctor ordered.

Svetski is here to deliver this cure for your sorrows and ailments. This concoction is for my brothers and sisters in the recent Bitcoin classes of 2019, 2020 and 2021.

This is the moment where you earn your bitcoin. Inheriting the world via first-mover advantage on bitcoin was never going to come easy, and each one of these episodes is an opportunity for you to not just stack some cheap sats, but truly build conviction.

The former is a nice perk, but the latter is what builds character.

In this short piece, I shall endeavor to remind you why we are all here.

Most freedom- and wealth-LARPing individuals will be running for the hills right about now, with their tails tucked between their legs. They shall be trading their energy money for toilet paper, government- or central-bank-issued funny money.

It’s an incredible sight to behold.

But… Those who don’t, those of you who stick around, are going to be forged into something more powerful and profound.

I am writing this for you, because I and many others have walked this same path. We are still in the early stages of what shall be a multi-decade struggle in which the old empire of lies must be replaced with a timechain of truth. The world cannot go on as it is. The center and the central planners cannot hold.

You are finally going to have an opportunity to become a Bitcoiner. Now is your chance to earn your way into the Bitcoin hall of fame, and I don’t mean some public record written on some wall. I mean the laying of a foundation for generational wealth.

We are still in the heat of the battle. What the world needs more of now is battle-hardened Bitcoiners with conviction, who will not, under any circumstance, yield to the enemy.

That enemy is multi-faceted. It includes the get-rich-quick schemes of the shitcoin space, the false gods of the fiat state and the fraudulent machinations of the central banking cartels. Each conspire to turn you into either a battery, a Judas, an Ephialtes of Trachis or simply a mindless blob of gray goo to be molded into whatever suits the hysteria of the moment.

There is no plan C. To take the island, you burn the fucking boats.

None of this is novel, it’s just our generation’s version of the struggle. The psyche of the victor remains the same.

That inherent advantage is what makes us different to both the lemmings and the parasites, the former who are oblivious to what’s going on, while the latter want to maintain the status quo because they get to pull the levers.

The intolerant minority wins, because they shall not yield. Time is always on our side. We may not have the numbers, but we have the advantage of the gravity of truth. The Empire of Lies has to fight entropy. As such, it will lose.

Lock up your bitcoin, make it impossible to touch, and watch what happens.

When I wrote about the 42 reasons to sell your bitcoin in January 2022, I was very clear about what this year was going to look like. I’m not even sure I consider what we’re going through a “bear market.” At worst, it’s an intermittent phase within a broader up-cycle. Either way it is irrelevant, because it serves but one purpose; earning your bitcoin.

“42 Reasons to sell your Bitcoin:

Then you’re in for a rude awakening. Sell your bitcoin.

2. If you believe it won’t go higher:

Then what are you even doing here?

3. If you believe in 14-year-old tea-leave analysts with large Twitter accounts:

If this is the basis upon which you bought bitcoin, then you should definitely sell it all. Drawing lines on a screen helps you understand “why bitcoin” just as much as watching someone else train at the gym helps you lose weight…

Then you should sell it.

Then you can’t do math … so you should sell it.

Then you should sell it.

Then fuck me … you’re definitely beyond help or reason. These clowns have been right once in 10 years and you’re still watching them?

I suggest you not only sell your bitcoin, but buy some BSV, make a poster of Raoul, put it on your wall, take a photo, make an NFT and pretend like you just made some innovation in Web 3.0…

40. That transforming the world was going to be easy:

If you wanted salvation and thought it would come with no sacrifice, if you thought that winning was going to be a walk in the park and that we were not going to have to earn this over decades of ridicule, then I’m sorry, you were gravely mistaken.

If you think that ‘The Great Transition’ would somehow be a Kumbaya where we all hold hands and skip happily onto a Bitcoin standard, then you’re about as deluded as the next central planner and I would prefer that you just give up now. Go draw unicorns and build smart contracts on Ethereum.

Over here in Bitcoin, we need warriors: The 300, not the Arcadians…

I get genuinely happy when bitcoin drops, not because I get to buy more cheap corn (that’s nice to have, but $20,000 differences now mean fuck all later), but because it shakes out all the lemmings and losers.

A new elite is forming, and one whose core principles and character is different from the ‘masses’ that preceded them.”

Your focus right now should be on a few simple things:

Number three is a direct corollary to the question of whether or not you would’ve been a camp guard. As Jordan Peterson says, most people would have just “obeyed” because it’s easier to go with the crowd or the prevailing narrative. Compliance and obedience is the mark of the masses.

The Remnant are those who cultivate and forge the monster within. They are those who can say “no” to the false narrative, and stand their ground not because someone told them to, but because it’s the right, honest and truthful thing to do.

This is where identity is built, and as Tony Robbins would say, the greatest force in the human psyche is the need to stay consistent with one’s identity.

Now is the time to forge the identity of the Bitcoiner. The Remnant. The intolerant minority. He or she who shall not yield.

It reminds me of the famous line by King Leonidas of the Spartans.

“What is your profession?”

Who shall you choose to be?

Are you an Arcadian, or a Spartan? It’s fine to be either, but now is the time to choose. Another quick excerpt from “Why You Should Sell Your Bitcoin”:

“This journey is a rite of passage. It’s not about getting rich, and it’s not even about a legacy. It’s about building a fucking dynasty.

Cheap sats are a bonus, but it goes far beyond that.

It’s about unevenly distributing bitcoin into the hands of those who get it, who care and who are willing to go up with the rocket or down with the ship.

These shakeouts mean that the future kings, lords, emperors and gods will have more.

Whilst the parasites, slaves and lemmings will have less.

We are going back to the age of greatness.

Bitcoin falling in price sharply, on a regular basis wipes out all the shitcoiners and get-rich-quick sub-humans so that the royals, nobles and pure bloods can collect.

And as Randy Savage would say … ‘You may not like it, but accept it.’”

This is your opportunity to viscerally learn that the only monetary measure that counts is how much bitcoin you have. If you have more today than you did yesterday or last week, you are winning.

The “exchange rate” between bitcoin and other units of account is irrelevant, because each of those units are transient in nature. What matters is the absolute territory you can amass on the Bitcoin network and your proportion of the total units of energy money available.

If you can master this mindset, your descendants will have a foundation upon which to build. If you do not, nobody can help you.

This is the greatest time in human history to be alive. Do not squander it. Revel in the pain. Embrace it. Let it forge you into something greater.

You are a Bitcoiner in the making.

This is a guest post by Aleks Svetski, author of “The UnCommunist Manifesto,” founder of The Bitcoin Times and host of “The Wake Up Podcast.” Opinions expressed are entirely their own and do not necessarily reflect those of BTC Inc or Bitcoin Magazine.