Has The Bitcoin Hash Rate Gotten Too High? 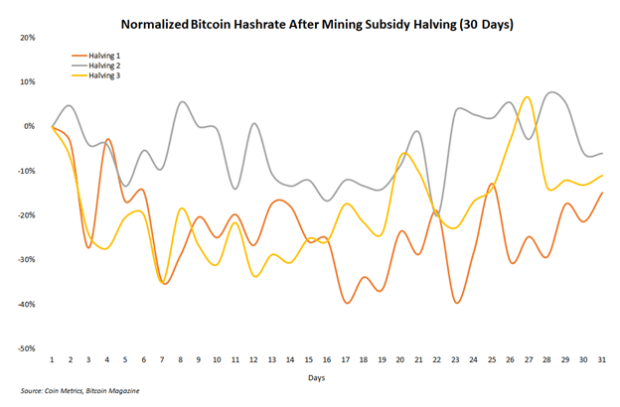 The Bitcoin network’s hash rate level continues to hit record highs in 2022, but how much hash rate is enough… or even too much?

Miners provide a last line of defense for securing the Bitcoin network against brute-force attacks from malicious actors who might accumulate a majority of SHA-256 hash rate. The more hashing power is spent discovering new blocks for the longest Bitcoin chain, the more secure the funds on the trillion-dollar network will be. Despite a significantly depressed bitcoin price, however, which is currently sitting more than 50% below its latest all-time high, the network’s hash rate continues growing and has set new record highs multiple times this year. In fact, hash rate might be the only bitcoin chart still going up and to the right in the current market phase.

But how much hash rate is enough? And does Bitcoin have too many miners?

This article takes a slightly unorthodox and potentially unpopular look at hash rate subsidies and offers a surface-level consideration of current hash rate levels from the perspective that Bitcoin’s security would not be meaningfully endangered if hash rate materially declined from its current near-record levels.

To be clear, this idea has nothing to do with energy concerns over mining activity. It only considers the future of mining economic incentives, their effect on network security and a minimum viable hashrate (MVH) level for Bitcoin.

Who Cares About Too Much Hash Rate?

A reasonable reader may ask themselves (or angrily message this author on Twitter), “Who cares if Bitcoin hash rate is ‘too high’?” This is a fair question to which the answers are twofold.

Some hash rate is likely to fall off in a couple years after the next block reward halving. This isn’t a very important development, but as bitcoin-denominated mining subsidies drop (again) by 50%, marginally less-efficient hash rate will inevitably be squeezed out of the market. The chart below shows slight immediate changes in bitcoin hash rate 30 days after each of the prior three halvings:

Also, mining revenue from transaction fees is very low. This fact has prompted loads of criticism about Bitcoin’s long-term security budget across the industry, from Bloomberg journalists to Ethereum researchers and others. One response to these critics is to rhetorically ask, “So what?” Another approach is to hypothetically assume the argument is at least partially correct, that future transaction fee revenue cannot fully support financial incentives for indefinitely growing hash rate levels, and then to ask, “If decreased miner revenue causes hash rate to drop, how much is enough?”

The More, The Better

The mainstream approach (in the small community that is bitcoin mining) to hash rate growth is usually that more is always better than less. Of course, more hash rate means lower revenue for the marginal mining operation. But why not strive for so much hash rate through continued exponential growth of the mining sector that no outside entity would even think about committing a 51% attack on the network?

That amount of hash rate is basically where Bitcoin is today, and a goal to maintain or increase it is not bad. Especially in the first few years of Bitcoin’s existence, “the more the better” was a truth to live by for hash rate growth.

Satoshi Nakamoto created an extremely effective bootstrapping mechanism via the mining subsidy. Subsidize or die was the condition of Bitcoin’s very early years, and Nakamoto demonstrated general awareness of the protocol’s early fragility in their reaction to the 2010 WikiLeaks incident.

“No, don’t ‘bring it on.’ The project needs to grow gradually so the software can be strengthened along the way,” they wrote.

Subsidies are any form of economic payment, privilege or other incentive allocated to accelerate or promote a desired outcome. Just like agricultural subsidies incentivize production of corn, wheat and other commodities, mining subsidies incentivize more hash rate. But subsidies are inherently tools for market distortion, and they should never be a permanent feature in any market. All signs point to Nakamoto respecting this economic reality by halving the subsidy every four years, which will eventually result in the subsidized mining revenue dropping effectively to zero.

And the subsidy works! Consider the recent example of China’s mining ban. The mining sector’s shockingly-rapid recovery to the most significant hostile political development in its history demonstrates how strong the economic incentives are to continue mining. Not only did hash rate fully recover six months after the ban, but as mentioned previously in this article, it continues setting new highs.

But every subsidized market eventually faces the question of excess.

How Much Hash Rate Is Enough?

This article doesn’t attempt to offer an exact number of how many exahashes (EH) are the minimum amount of hash rate required to secure Bitcoin. Data that’s potentially helpful for deriving this number has been discussed at length by thought leaders like Paul Sztorc, Lyn Alden and others. But it’s a healthy thought experiment for any bitcoin investor to consider their best guesstimate of how much hash rate the network could afford to lose.

One miner thinks this number could be as much as 25% of the current hash rate, according to a recent episode of the “Stephan Livera Podcast.” Agreeing that the mining subsidy is likely funding hash rate the network doesn’t need on the episode, Braiins Insights Lead Daniel Frumkin said he “wouldn’t be overly concerned” about a 51% attack on the network in a scenario where hash rate was 150 EH instead of its current 200+ EH level.

Of course, with the hash rate near record highs, the Bitcoin network is more secure than ever. But instead of providing an in-depth analysis of minimum viable hash rate, this article hopefully compels readers to consider that; first, hash rate may not always go up forever; and second, if it doesn’t, Bitcoin’s security will still be more than okay.