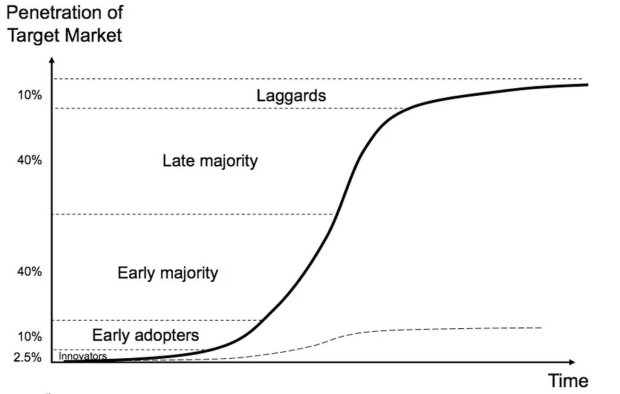 The report begins by outlining what an adoption curve is, which can be described as a sociological measurement of a particular idea’s life cycle. While technologies change, human reaction to innovation is largely predictable. This prediction is outlined in the widely-used “S-Curve,” depicted in the chart below.

Spoiler Alert: Blockware’s report notes that we are still in the “early adopters” phase. But, how is this quantified? How can adoption be viewed as a metric?

Then, of those metrics, the company calculates a weighted average (60%, denoting 20% to each) for: Internet, Smartphones, and Social Media. The results are staggering.

The report goes on to explain adoption of Bitcoin will likely outpace other technologies for two main reasons. Bitcoin provides a monetary incentive to adopt as the price rises, and the internet allows an exponential increase to the speed in which information is spread.

Blockware initially quantifies the growth through bull markets through the eyes of new users, defined as “New Entities,” on Glassnode, a blockchain heuristics company sourcing data provided in the report.

These new users set the tone for a new bull run on the market as convicted holders remain. However, the flaw of this metric is it does not track users who left the network. This is where “Net Entities Growth,” comes in to explain the difference between new users and “disappeared,” users. But even by this calculation, the trend remains largely unchanged.

When the 30.8 million users are divided by the global population, we are left with 0.36% global adoption. This estimate would still have us in the innovators section of the S-curve. However, it is important to note that this is on-chain data only.

“Using the Cumulative Sum of Net Entities Growth and its [10-year compounded annual growth rate] CAGR of 60% we forecast that global Bitcoin adoption will break past 10% in the year 2030,” Blockware stated in the report.

We are still so early.