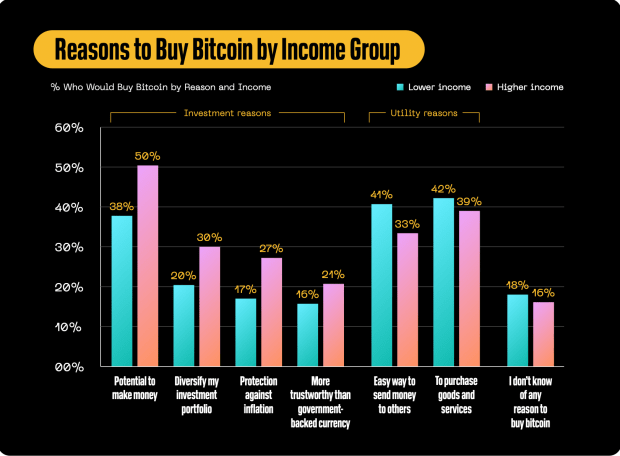 One immediately noticeable trend uncovered in the survey addresses a simple question. Why should someone buy bitcoin?

One of the most common conceptions involving bitcoin is people just want to invest in it to make money. Block’s report states:

“People with below-average income more frequently note using bitcoin as a way to send money and buy goods and services than people with above-average incomes,” as noted in the graph below.

The survey also found that knowledge of cryptocurrency largely dictates whether or not investors are interested in purchasing bitcoin. Over 40% of respondents who claimed a “fair to expert knowledge” level in the space noted they would likely purchase bitcoin within the next year showing a large amount of optimism.

“However, nearly a quarter of those who rate their knowledge of cryptocurrencies as ‘fair to expert’ remain skeptical of bitcoin’s future,” said the report.

Meanwhile, the report continues to explain that knowledge gaps are directly correlated to skepticism.

“Again, we see not knowing enough about bitcoin was far and away the most common reason not to buy it, but cybersecurity, price volatility, and an uncertain regulatory outlook are also commonly cited reasons,” according to the report.

However, the lack of knowledge in bitcoin does not equate to a lack of awareness. Far above the other cryptocurrencies, 88% of respondents have at least heard of bitcoin. Millennials came in at 92.5% while baby boomers surveyed at 89.2% awareness of bitcoin, but all age cohorts surveyed still showed a high degree of awareness. The gap in awareness to even the second-most recognized cryptocurrency is…noticeable.

“Interestingly, though, the optimism gap between high- and low-income respondents is the smallest in the Americas, and that optimism gap disappears completely if you remove those who say they don’t know anything about cryptocurrencies.” – Block