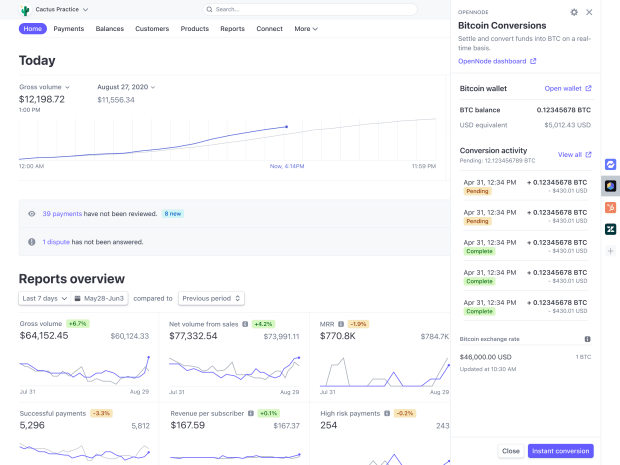 Stripe, a global payment processor, is working with OpenNode to enable businesses to convert fiat payments into bitcoin.

Stripe, one of the leading payment processors in the world, just announced they are working with bitcoin payments infrastructure company OpenNode, to allow businesses to convert fiat payments into bitcoin.

Businesses will be able to view their bitcoin wallets and conversion rates at a glance within the app, as seen below.

The application will also allow businesses to connect directly with their bank accounts enabling accessible bitcoin conversions from fiat at any time as depicted below.

The automatic conversion from fiat to bitcoin is accomplished through a split-payment feature located in the app, which businesses will be prompted through when going through the initial setup process. Should businesses choose not to set up split conversion initially, they can simply return to the app’s setting and enable the feature at any time.

Stripe’s app marketplace was also announced today which will allow companies like OpenNode to create customer user interfaces that will streamline workflows and allow data syncing compatibility between Stripe and its participating partners.

Using Stripe’s open application programmable interface (API), developers can start building apps that will support Stripe integrations. Billing for applications will be fairly straightforward for businesses looking to build on Stripe as the company said Stripe apps do not currently offer billing for apps, however apps can either be free or paid for but companies will need to handle their billing outside of the marketplace at launch.